“London meant so much to me and it really inspired me. So hopefully for the children and teenagers back home just push every day and don’t give up.” 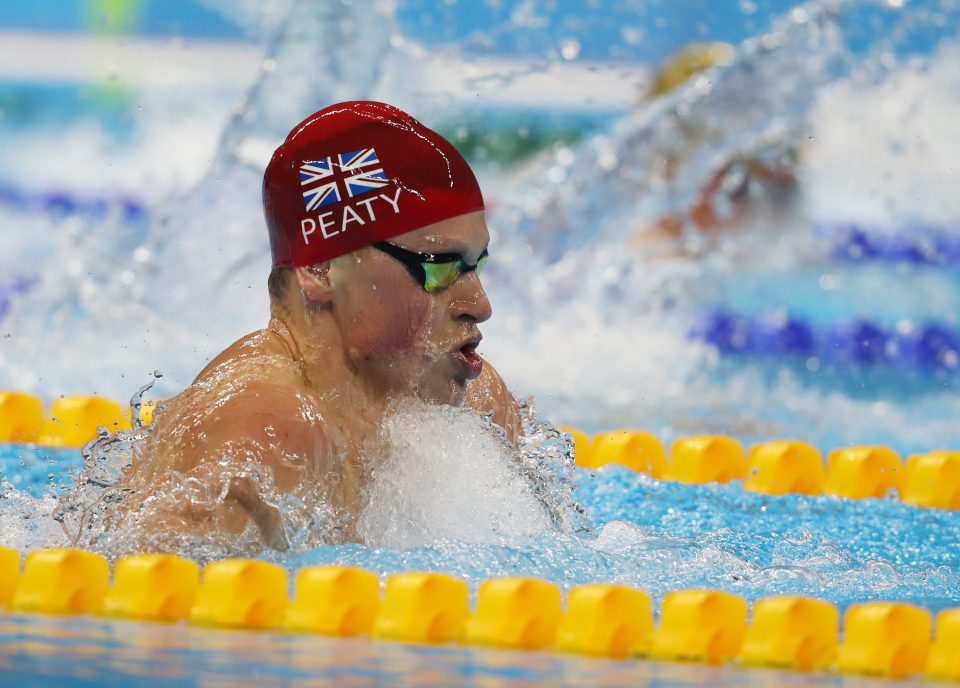 In the first week back after the Summer break curiosity got the better of me, I found myself asking the children to raise their hands if they watched any of the Olympics. The first time I did this I was amazed that 11 children in a class of 30 had not watched a single part of the Olympics!

I understand that not everybody finds physical activity interesting (although I remain convinced that these people just haven’t found the right activity – potentially through lack of effort, Oooooh controversial).

In some KS2 classes the amount of children that watched a single part of Rio 2016 was in single figures!

To be clear, my role as a Specialist Leader of Education enables me to see a great deal of classes. Within Schools there were some where a large majority had watched a part of the Games – but it began to dawn on me that lots of our children weren’t privy to the awe-inspiring efforts of Team GB in Rio 2016.

I felt a little sad for those children, I can remember spending my Summer setting up the garden chairs as hurdles and being Colin Jackson. I would throw giant sticks as Steve Backley and run as though I needed the toilet just like the enigma that was Michael Johnson.

I saw this quote recently and I love it.

“Inspiration is the rocket fuel that makes ordinary days extraordinary!”

In my opinion the Olympics in Rio should have a legacy as great as London for many, many reasons. Personally I see the following 2 as the main reasons:

Girl Power! – The women in Team GB absolutely smashed it. Thanks to them little girls in Great Britain have SO many powerful, healthy, positive role models.

The breadth of Success – I have no statistics to back this up as I’m writing, but I feel like at this Olympics we were succeeding in a wide range of activities. If variety is the spice of life, Team GB is a Carolina Reaper! I believe as educators we should use this to our advantage ASAP.

I saw Jake Humphrey’s tweet bemoaning the fact that Joey Essex has more followers than Jason Kenny, he stated that he felt it was time to ‘hit reset’. I can sympathise with the point he is attempting to make, although I’m not sure the amount of followers a person has is the key indicator to their level of influence over the youth of today.

But there certainly is an element of truth in that notion. If you subscribe to the rhetoric published in our nation’s mainstream media it is possible to see how individuals reach the P.O.V that the type of trainers you’re wearing is more important than what you attempt to do in them!

All of the aforementioned makes our need to maximise the Olympic legacy even more poignant. I’ll now share some of the things I’ll be doing within our MAC, if you like it – pinch it! If you have better idea’s PLEASE, PLEASE, PLEASE share them!

The Road to Rio

We ran this prior to the Olympics to create a bit of buzz. It’s a very relaxed method to try and inspire the kids to be more active and we were really happy with how it went! 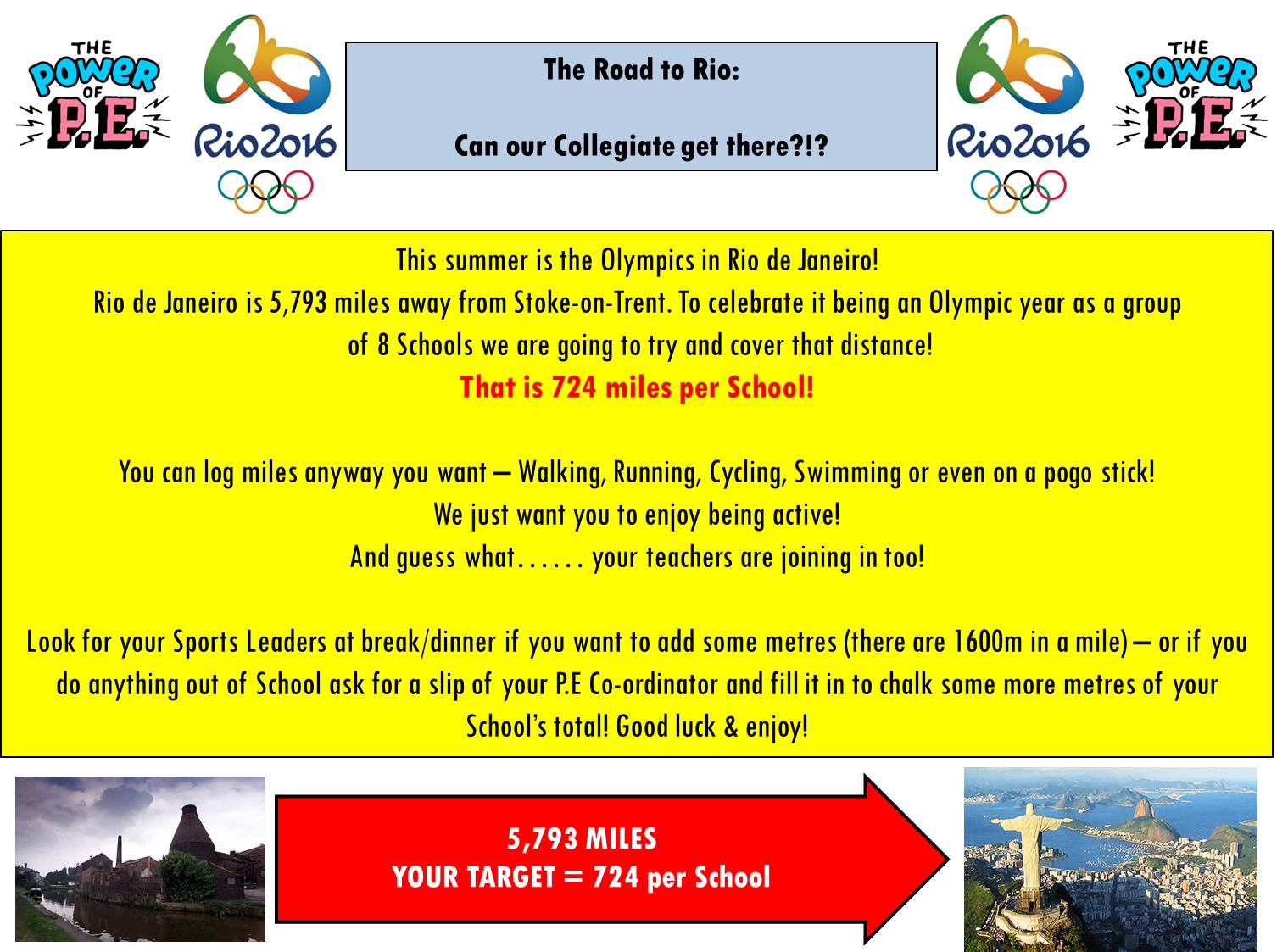 Underneath our P.E noticeboard we have started leaving newsletters and posters, the kids can take these home, put them on their lockers – do anything they please with them really. We find it is a really good way to elevate the profile of P.E within the School and we can reinforce some of the key values we hope to teach the kids during their time with us.

I’ve put a couple underneath so you can get a general feel for the things the kids pick up: 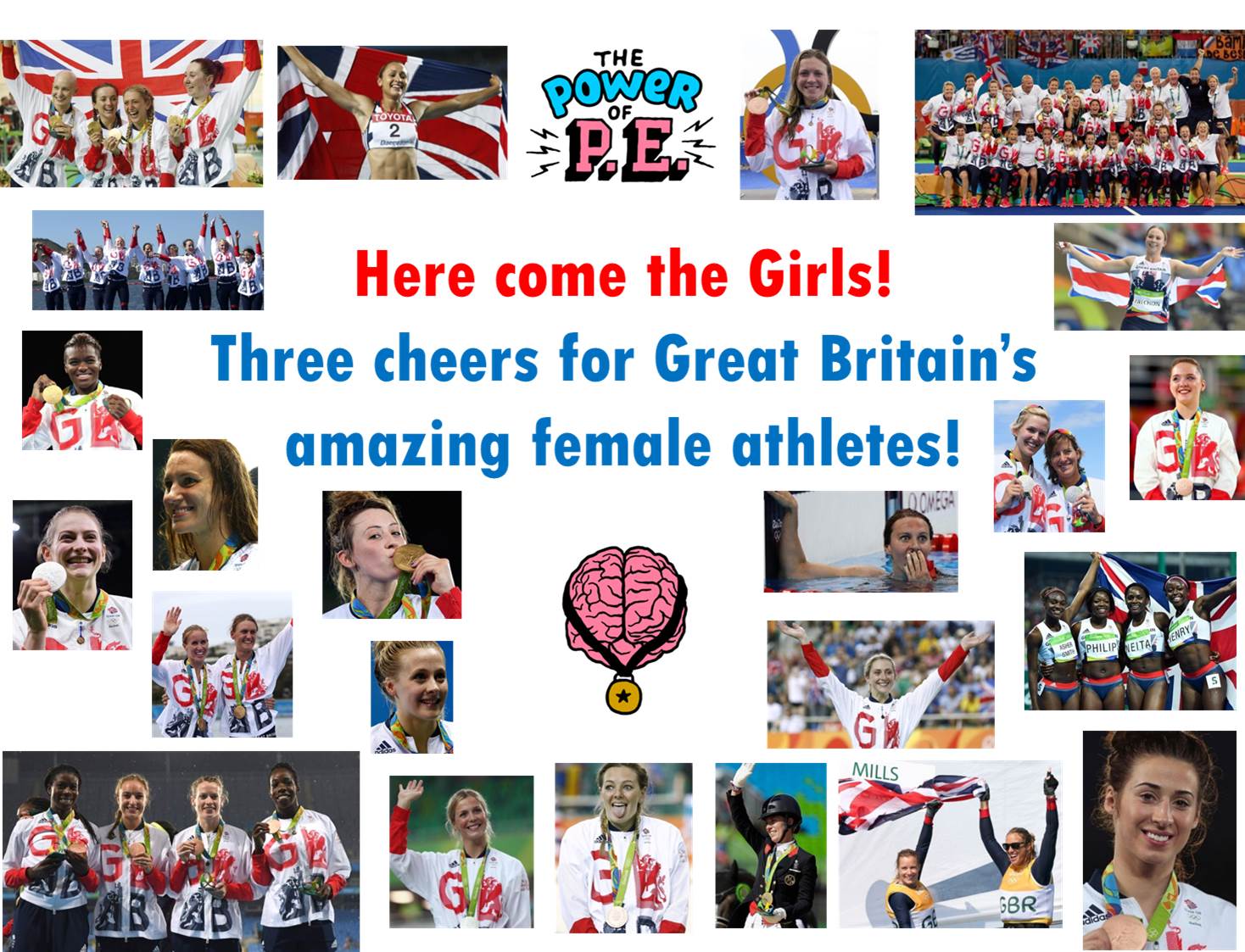 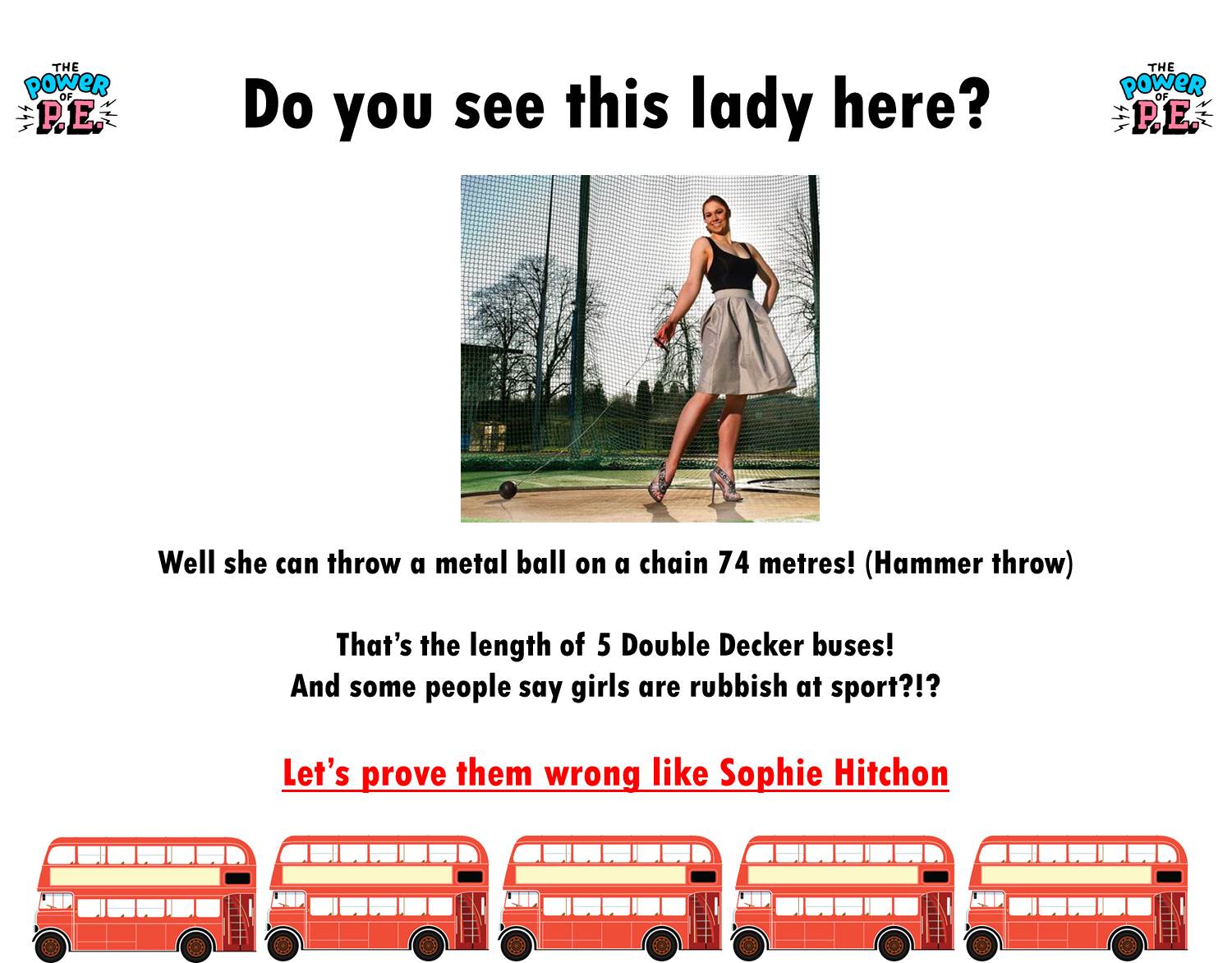 The Sport’s Personality of the year assembly 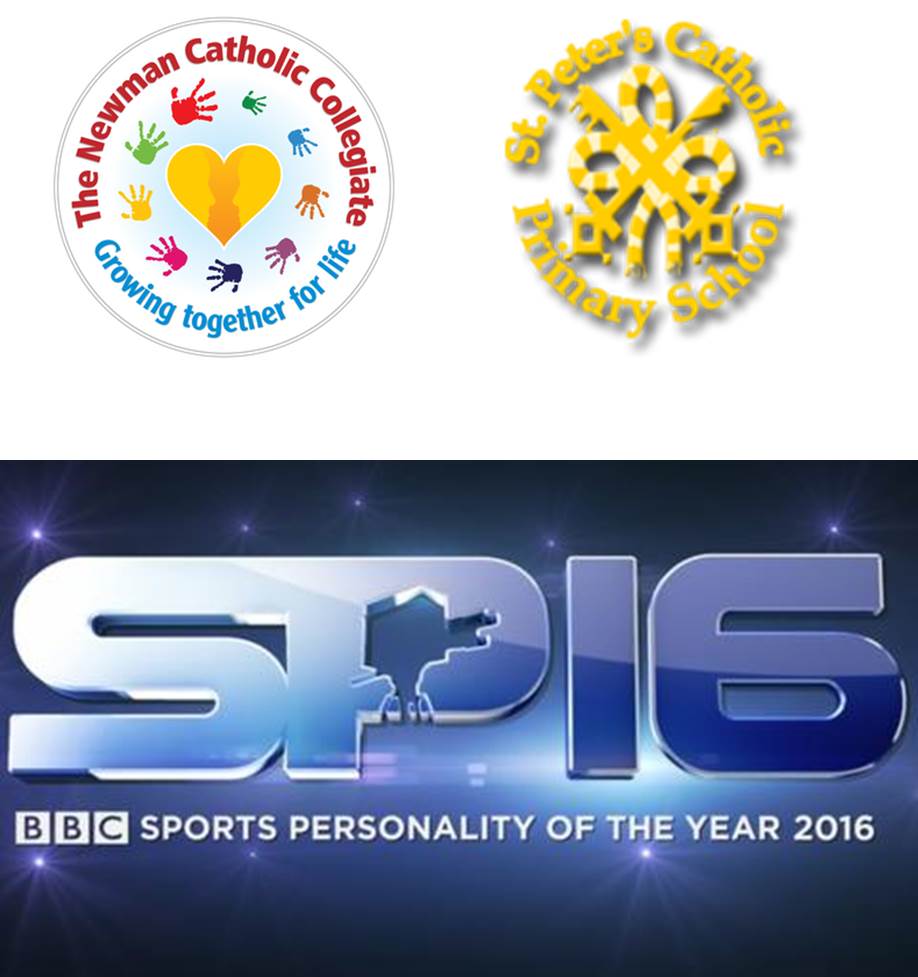 When we realised some of the children might not have been exposed to that much of the Games we decided to hold a special assembly, the idea was to hold a Sports Personality of the year within 30 minutes. We created a shortlist of candidates and explained why their achievements were so amazing, at the end of the presentation the children got to vote for who the wanted to win! (Jason Kenny, Laura Trott and Alistair Brownlee often came out on top although Amy Tinkler won at one School – they couldn’t get over her age!)

Once the assembly finished all the children were handed a list of the local sports clubs and organisations that they could get involved in, as a result we have seen a rise in the amount of children engaging in organised physical activity outside of School!

All of our kids were encouraged to take part in Olympic Pokemon Go! The children have to attempt to ‘Catch ’em all’ and participate in every activity on the sheet! 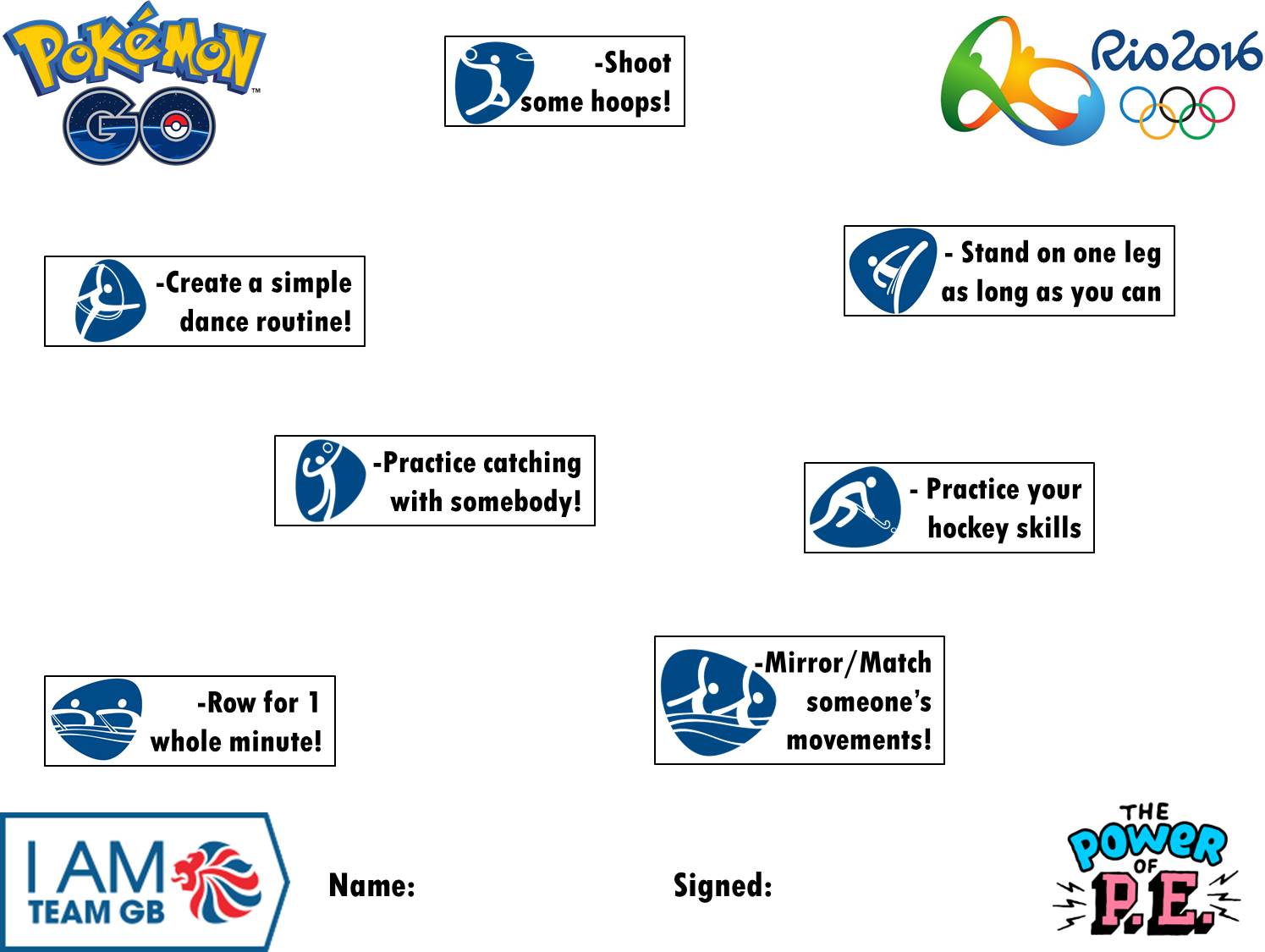 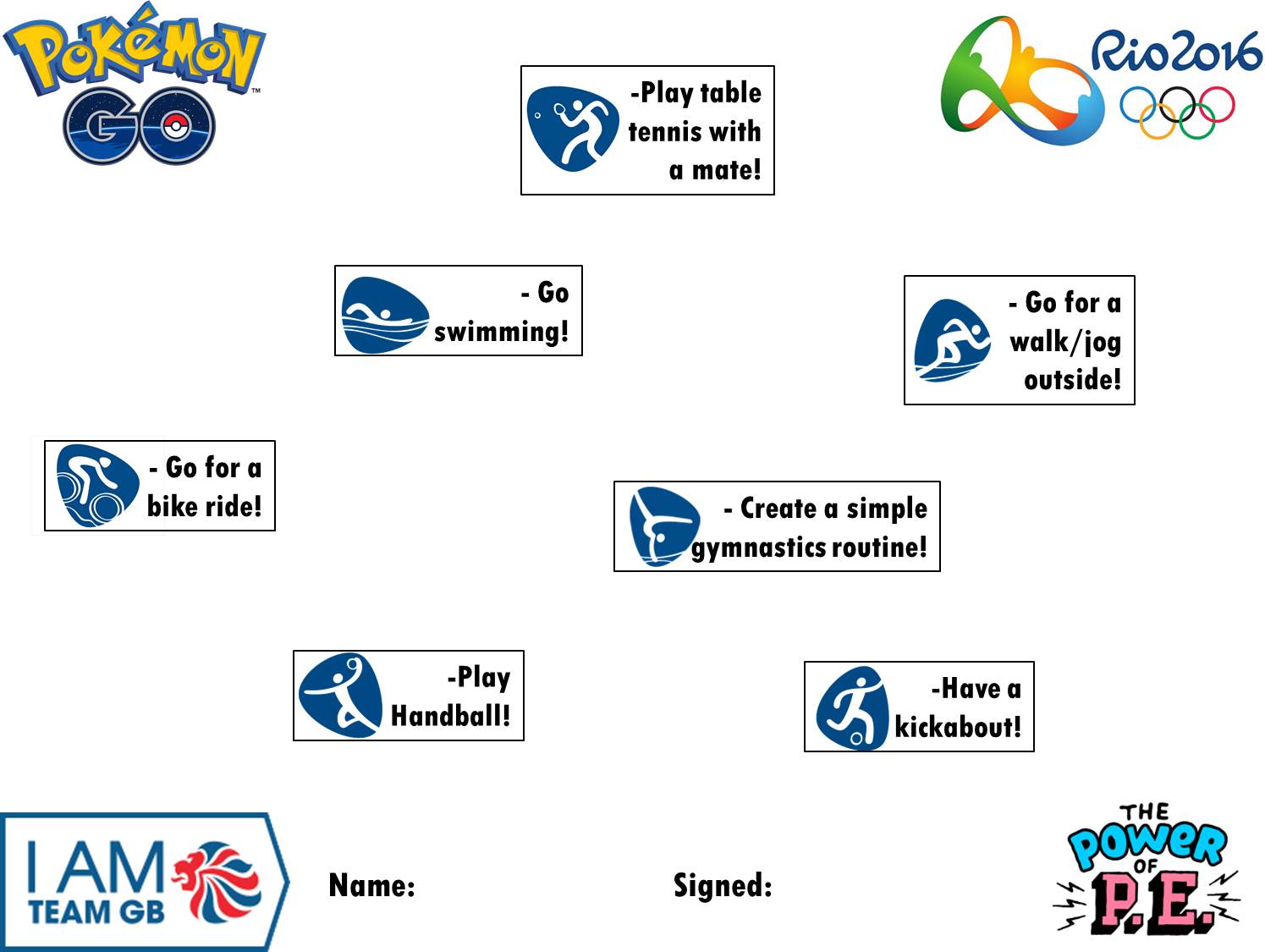 Olympic Challenge’s of the month

Within our MAC we run Challenge’s of the month. Our Sports Leaders set up these challenges and the kids have unlimited attempts to get the highest score possible. The top Boy and Girl across our Schools then receive a pair of tickets to a local sporting event!

This academic year all of these Challenges will have an Olympic theme!

This is the Challenge for September… 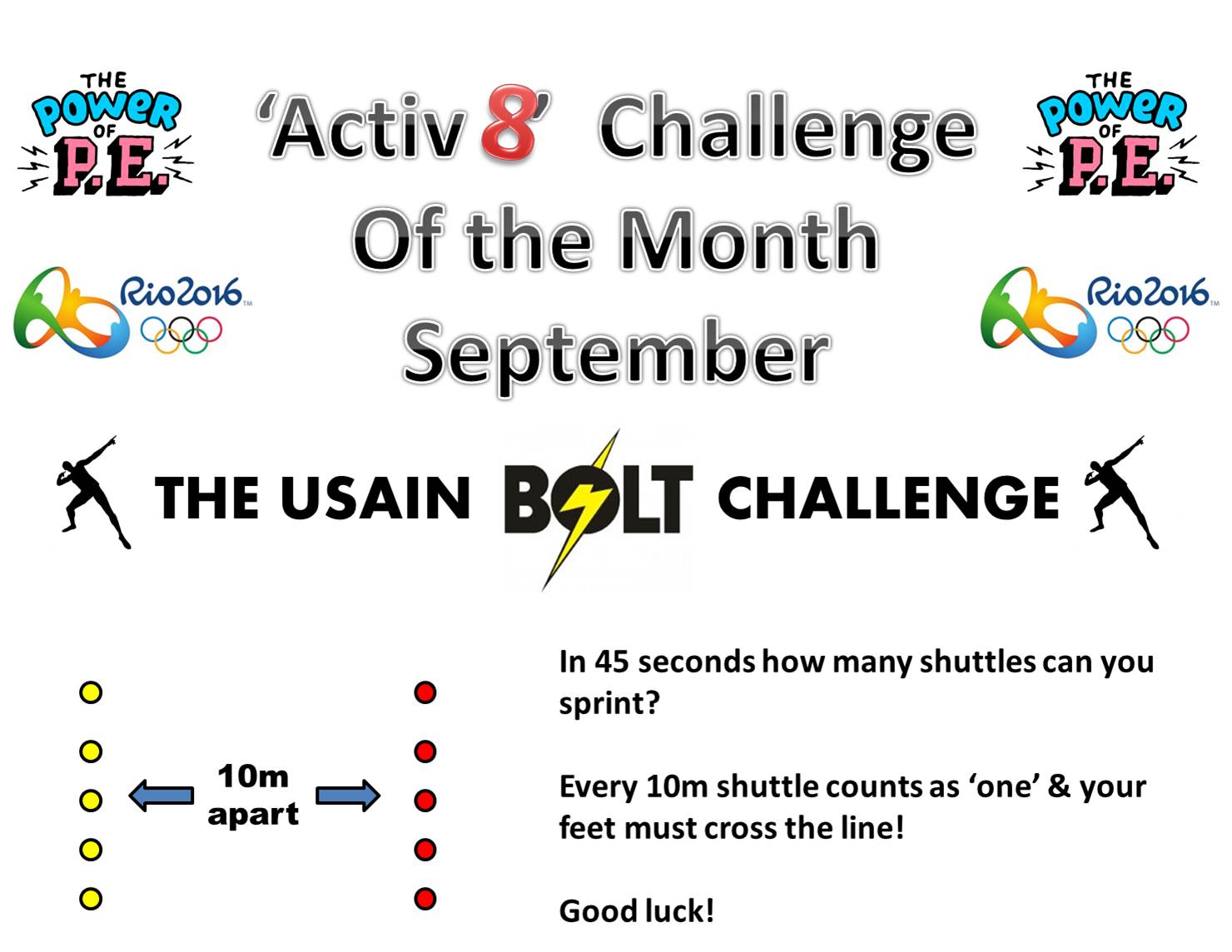 For year 4, 5 & 6 we have allowed the children to pick how they warm-up every lesson. The must pick one of 6 athletes featured, then warm-up like them for every P.E lesson. We hope this will see them improve in a FUNdamental area whilst maintaining the Olympic theme! 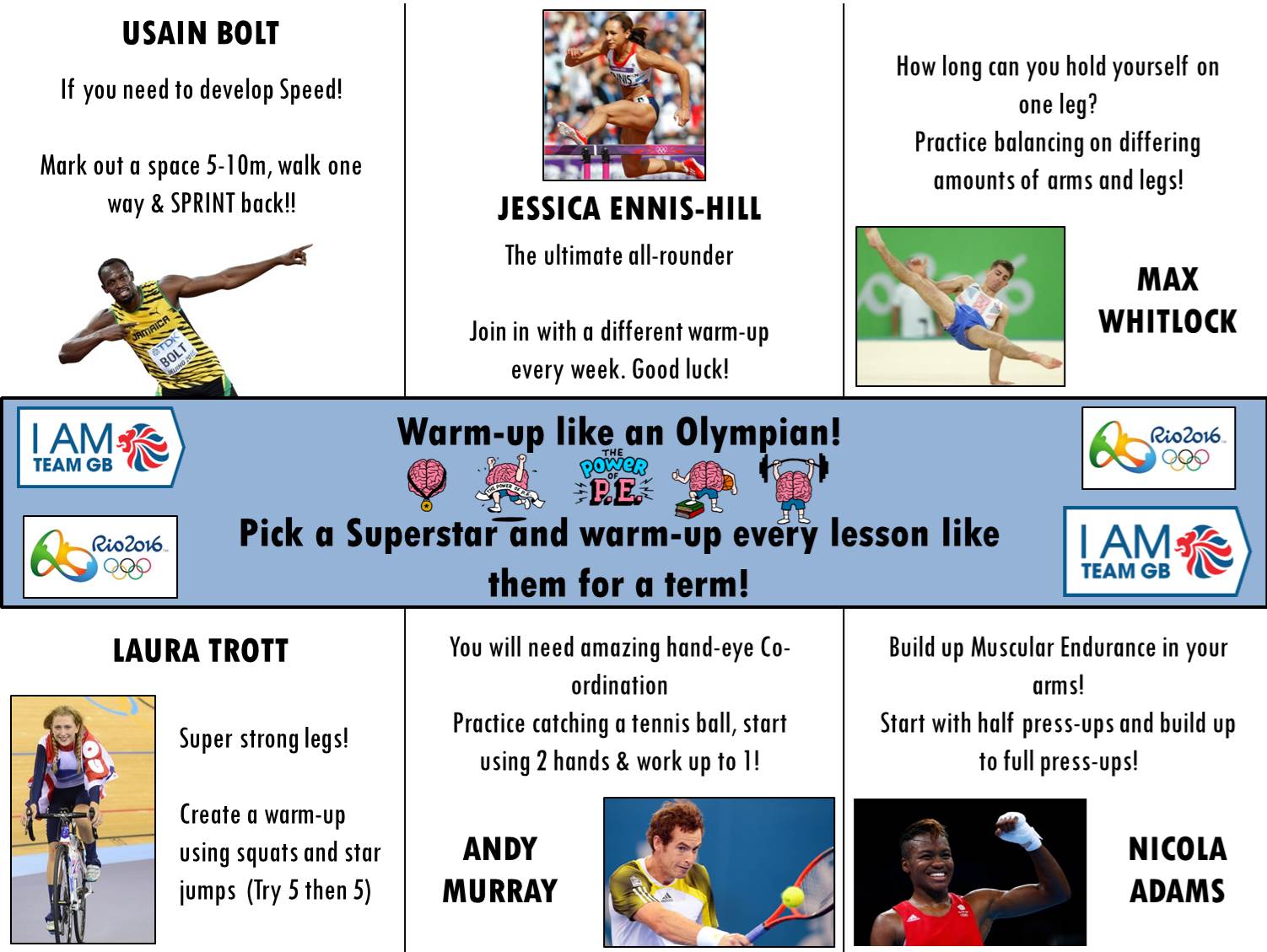 I hope that some of these methods could work in your School, if so – let me know!

Thanks for taking the time to read this blog, please feel free to have a nosey around the site to see if anything else tickles your fancy.