This half term has been the hardest of my professional career, and Summer 2 last year took some beating. After 1 week back in School I decided to dig a little deeper into ‘where we were’ and perhaps more importantly, why. The following is an edited version of a report I have sent out to all of the staff in the 8 Schools I work in. I thought it might be of interest for others to compare & contrast the enclosed with their own Schools.

In previous posts I have explained how we use Bleep Tests across our Schools. I created a set of classifications using the first Bleep Tests we ran in 2013 and have used these ever since. I am aware many of my P.E teacher peers are sceptical of fitness tests in Primary Schools. I can assure for our children it is a light-hearted, positive experience & for our staff it provides an insight towards our pupils willingness and capability to sustain a cardio-heavy task.

Since the children returned in September all of the children in Key Stage 2 have completed the Bleep Test. The results make for hard reading. I have added together the bleep tests from all of the Schools in the Trust to create a mean score for each KS2 year group. I did this for both the bleep tests completed this half term and from the last round of Bleep tests ran across the MAt (pre-lockdown) to enable us to compare and contrast. 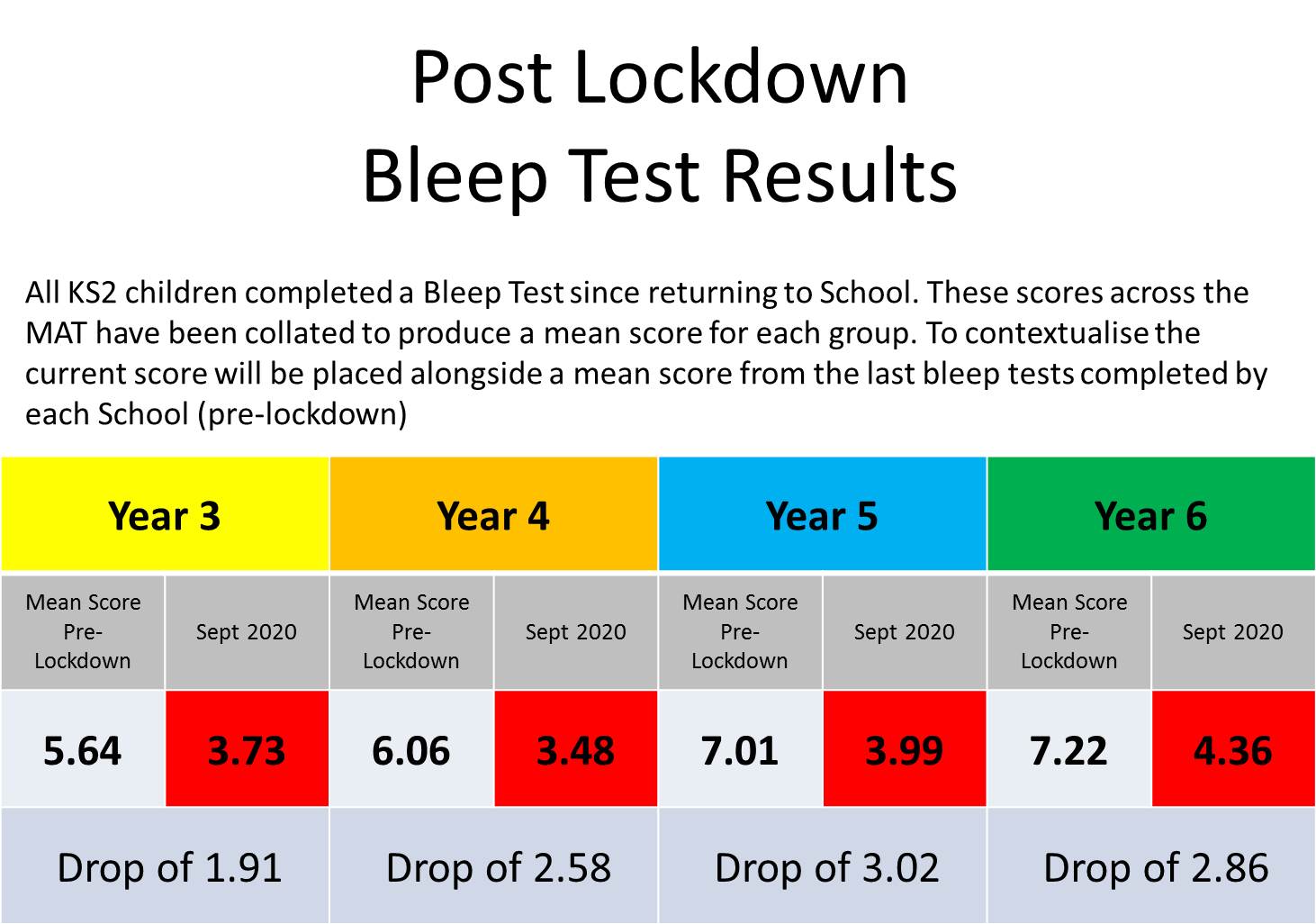 It is worth mentioning that usually in each class there will be one or two children who run a lot longer than the rest of the class, dragging the mean score higher. For example in one Year 4 class within our Schools the highest score was 6.5, the next best score was 4.3. The next image indicates where each year groups mean score would place in our classifications. 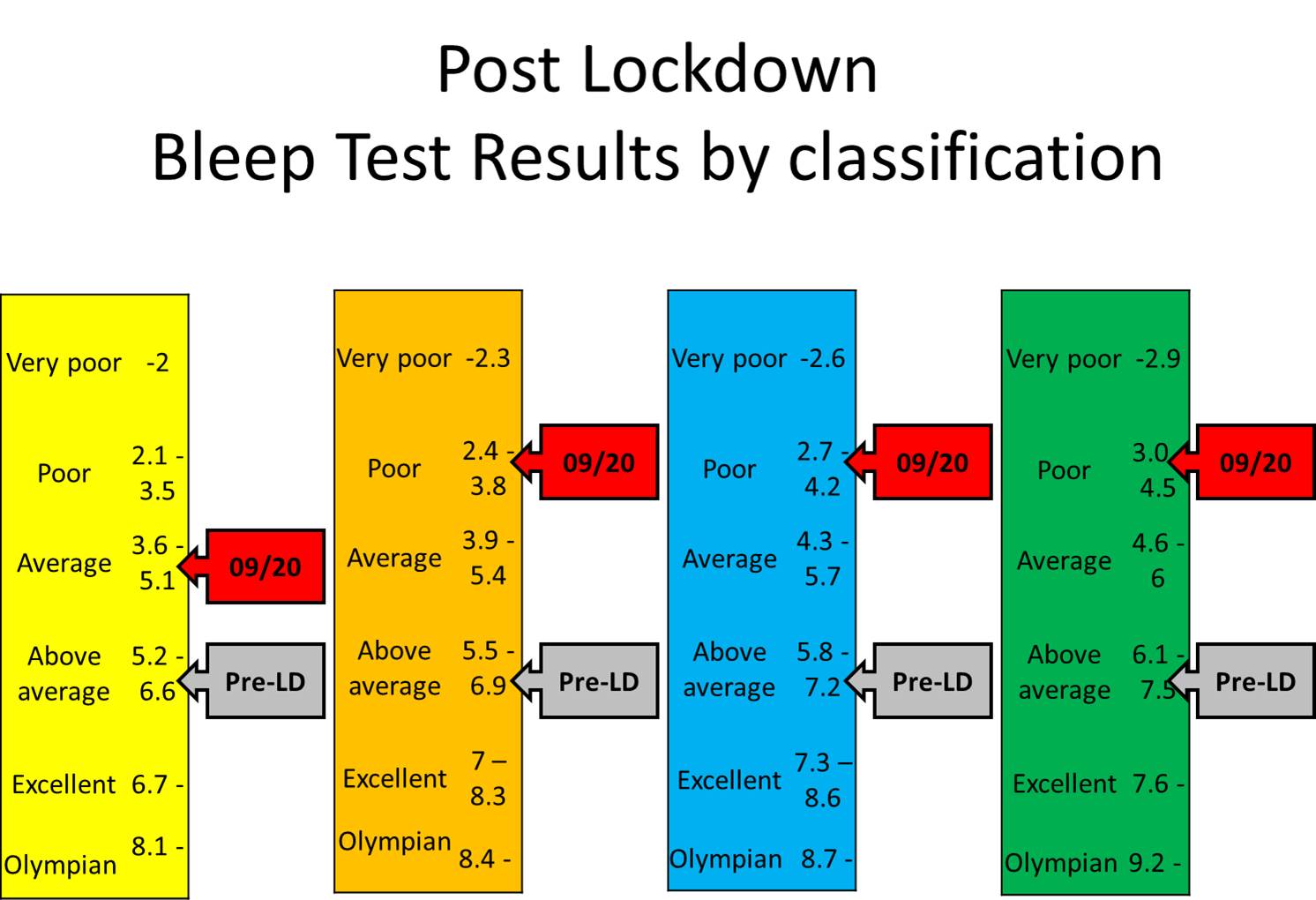 The classifications were created by myself using the first ever round of Bleep Tests we completed in 2013. The current round of scores is by far the worst we’ve ever recorded. The difference between pre and post lockdown scores is ever more apparent when we analyse them by their classification. 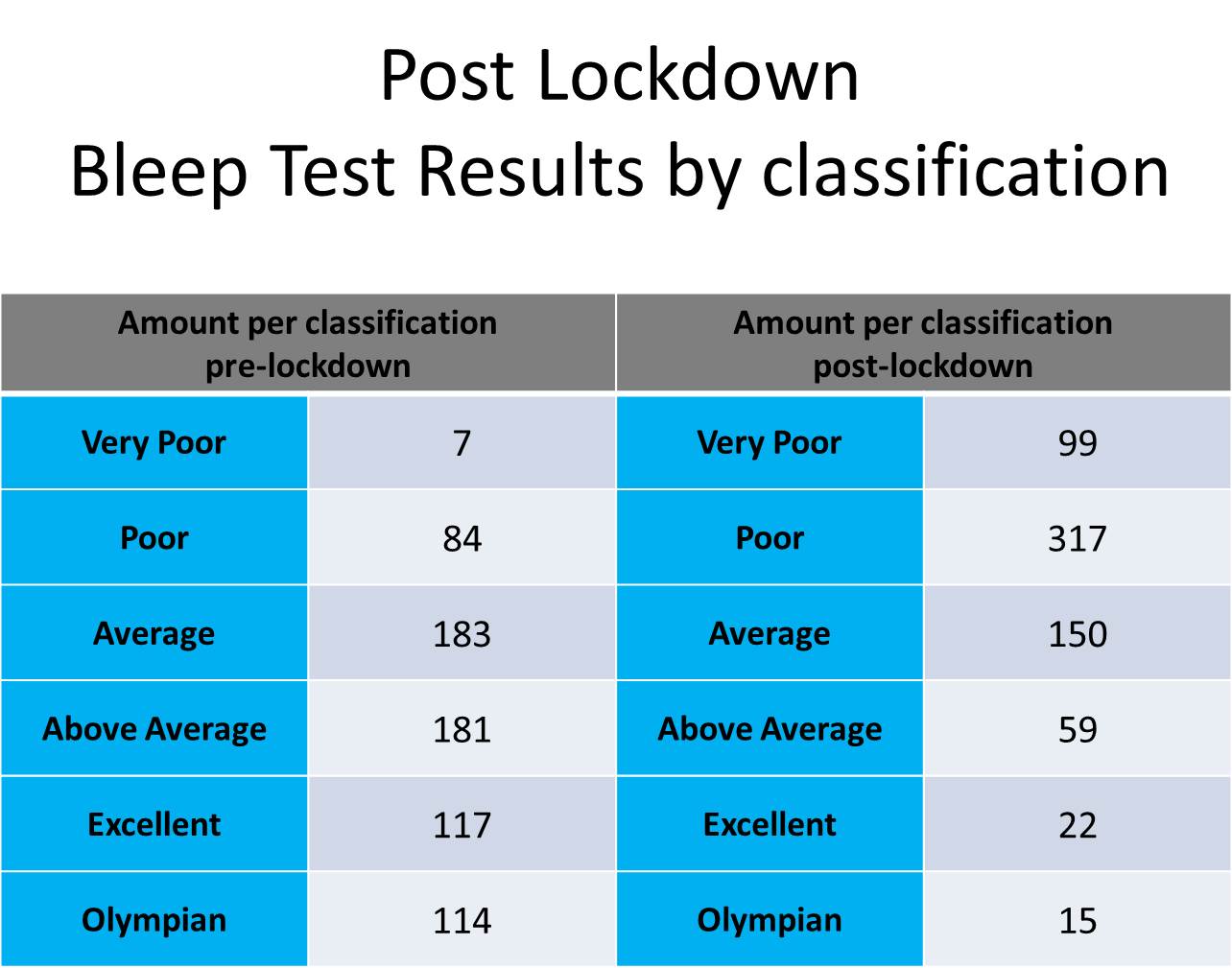 N.B – The Bleep Test itself is handled very carefully, all feedback for all children is positive and the test is one activity that is then followed by lots of light hearted ‘fun first’ games.

It is important that Staff are aware of the general fitness and bleep test scores of their children but they must never have a conversation with them specifically about their score. If children are encouraged to dwell on their score it will have a negative effect on their outlook on the subject. Once the tests are completed P.E continues as usual!

So why are the tests so low?

6 months away School is a very long time – but I was hopeful that families from our Schools would see this as an opportunity to get outside and active whilst they enjoyed some time together. The data from the Bleep Test suggests otherwise, so I decided to chat to our pupils to learn more about their experiences during lockdown.

After my first conversation with a group of Y5 children I started to realise I know nothing about how a lot of our children interact with technology.

The first question I asked was ‘What skills have you learnt over lockdown?’ – Answers included ‘to Crank 90’s’ (A skill in Fortnite where you build to get higher ground apparently), ‘to double edit’ (An evasive skill used to create a maze/illusion of sorts in many games I think) and ‘TNT Fishing’ (Using explosives to fish in Minecraft). I never mentioned computer games at any point, not one child mentioned a ‘tangible’ skill. By this I mean something that existed in a world without a screen.

Most children state they enjoyed staying up late during the lockdown and a high percentage say they are still having trouble going to bed earlier and getting back into their old routine.

I asked 10 classes across our 8 Schools how many of the children either play Fortnite, Minecraft or Roblox. 247 of 258 play these 3 games (96%). Lots of children mentioned a game called Rocket League too. Within the same classes 37 of 258 participate in organised physical activity outside of School (Just 14%). Computer games are nothing new of course but currently they seem to almost completely command our pupils’ attention.

In one Year 2 class within our Schools 24 out of 28 children happily told me that they have played computer games all day more than once. As in from the minute they woke up until they went to bed. Many members of this class are 6 years too young to play Fortnite, apparently this isn’t a barrier. The class teacher from that same class asked two of the ‘sportiest’ children in the class as they walked out for P.E if they would prefer to play football or Roblox, as quick as a flash the reply was ‘I haven’t got FIFA miss’. Sadly it never occurred to these two children to actually kick a ball.

A Year 2 teacher in a different School of ours asked the class if she filled a room full of brand new craft equipment, paints, toys, sports equipment and an Xbox what the children would play with first. 22 of 24 said they would play computer games.

When chatting to a group of Y6 children they mentioned that over lockdown they didn’t miss each other (for 6 months!). When they saw how confused I was they explained that they played with each other more than they normally do throughout lockdown, in the way that they always play together, online. Sitting down, speaking over headsets.

From that same class 21 of 27 told me that they had played online with each other over the course of the previous two days. It was a Wednesday.

The children in all of our Schools perceive computer games to be incredibly cool. The kids have taught me about their favourite YouTuber’s –  Lazorbeam, Unspeakable, SSSniperwolf, Fresh, Preston Plays, Mr. Beast, Lochlan, Flamengo, Jelly, McCreamy, ItsFunny, The Soup Squad, Pewdiepie. The majority of these are famous for being for exceptional at their computer game of choice. Our kids watch videos of other people sitting still and playing computer games, they tell me this is so they can copy their moves when playing themselves. I remember taping Basketball matches to try and copy Michael Jordan. A standard I could never reach, but at least I was moving!

Before I started to speak to the kids about these things I had never heard of a single one of these people. Some of these videos have 150-200m views!

Whilst the reality of the situation has left me feeling deflated as half term draws closer it has also given me plenty of food for thought:

If you have read this far then thank you for your interest. I know we are all feeling stressed, tired and adjusting to the new norm. But in terms of the current health of our children, the situation is dire. Lockdown has made it clear the extent to which some families expect Schools to develop every aspect of their child. An earnest hope for any child is that they lead happy and healthy lives, I worry that if we don’t act accordingly this year many of our pupils may fall into habits that render the latter impossible.