A Headteacher asked me earlier in the year if I would meet with some of her parents, with a view of addressing her concerns regarding inactivity/obesity amongst children locally. In Stoke-on-Trent 5% more of our children are obese when compared to the national average, whilst in our Schools fitness levels are rising, this particular Head thought it would be a good idea to be attempt to reach some of the families who could be deemed as less active.

We decided that we would try the following format:

The initial meeting with the adults had the potential to be awkward, so I made sure that I adopted a lexical choice that made it clear that the School wished to create a partnership – and we needed their expertise. I decided that to ensure all of the attendee’s felt motivated to try out the ‘games’ and tactics we would suggest, they would need an overview of the current ‘state of play’. Making the point that I was using a Powerpoint presentation purely so I didn’t forget anything, I started to share a few key facts. 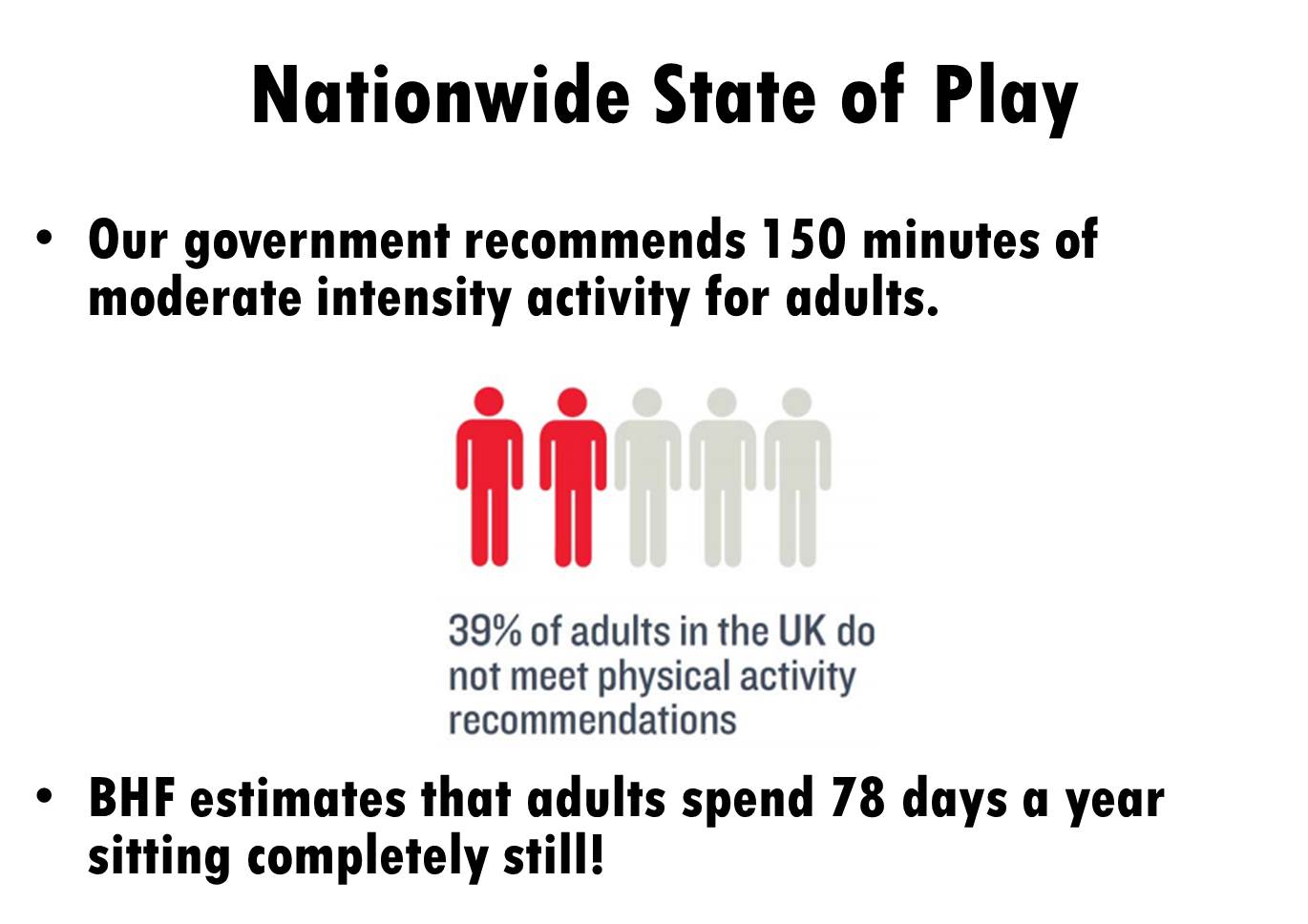 The bottom point hit home with the majority of the adults in attendance, I asked them to think carefully about the amount of exercise they manage to do. By the way I understand that this is not something that is often easily achieved for working families, I shared with the group that I don’t always hit that figure – with a little boy, a very demanding job and wanting to spend time with my wife, it is hard to make time for myself.

But I also know that one of the reasons that I enjoy being physically active is because if I’m honest, I’ve never known an alternative. Both parents were very active as was my older brother. I suppose in reflection I am a ‘victim of my environment’ albeit in a positive way. My little boy is 2 and a half now, I stopped playing Football competitively around a year ago – because I wanted to spend time with my family on the occasions where the teaching profession doesn’t dominate my time. But I also think in a strange way that by doing that I might be setting some form of bad example for him, if he grows up watching me play competitive sport – is he more likely to do the same?

I shared all of this with the group and asked them to reflect on their own habits, ultimately as parents I suppose we want to be the best role models that we can be, so I believe that in order to do so, we should be as active as possible too. 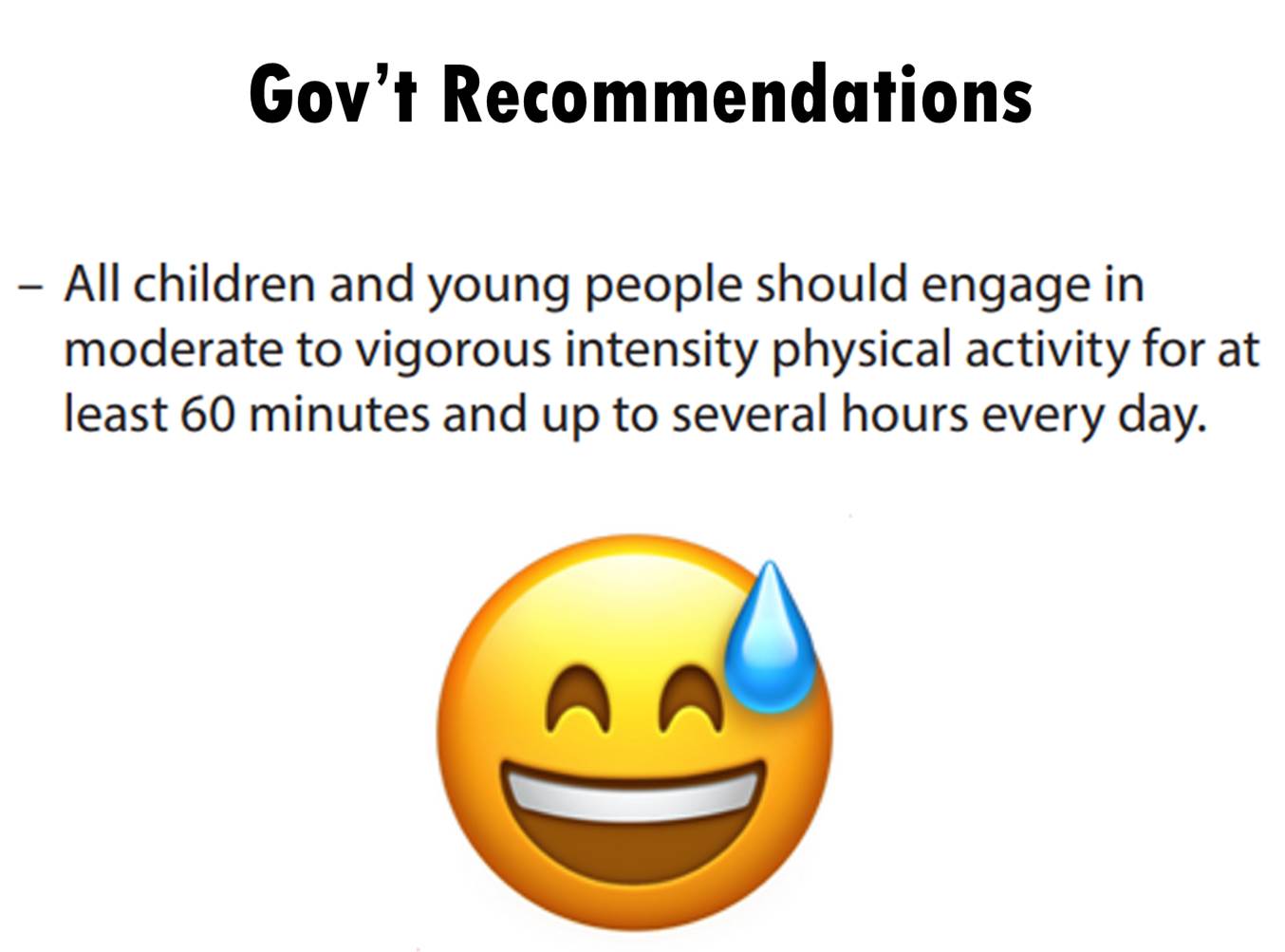 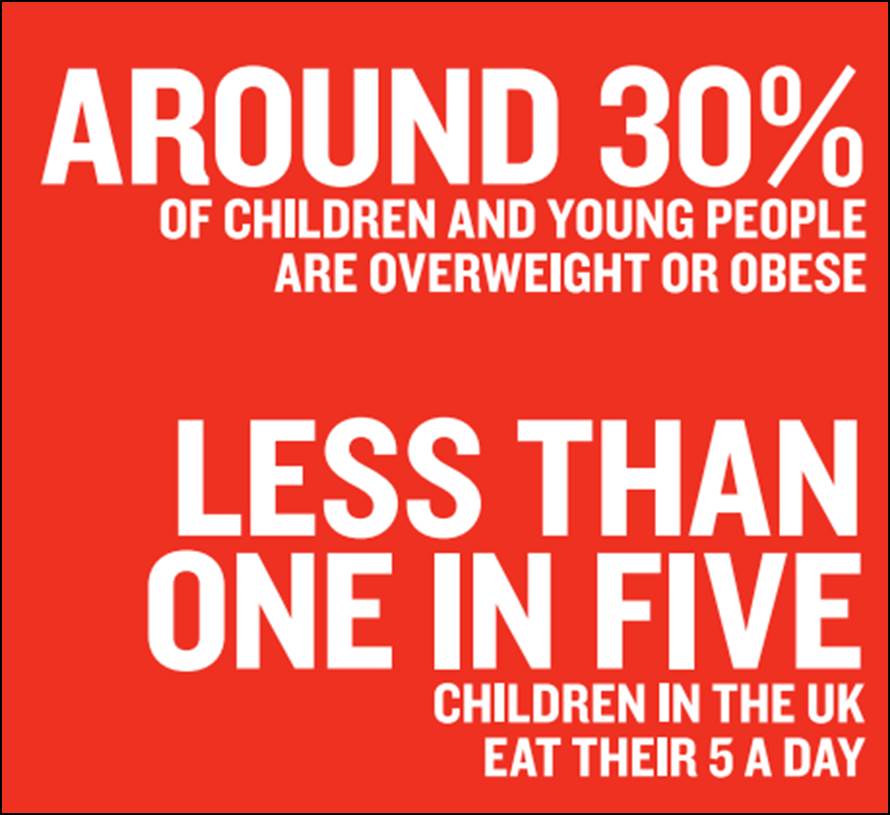 The above graphic was pinched from the British Heart Foundation who have published multiple studies that are equally alarming as they are useful. A simple google search will point you in the right direction. 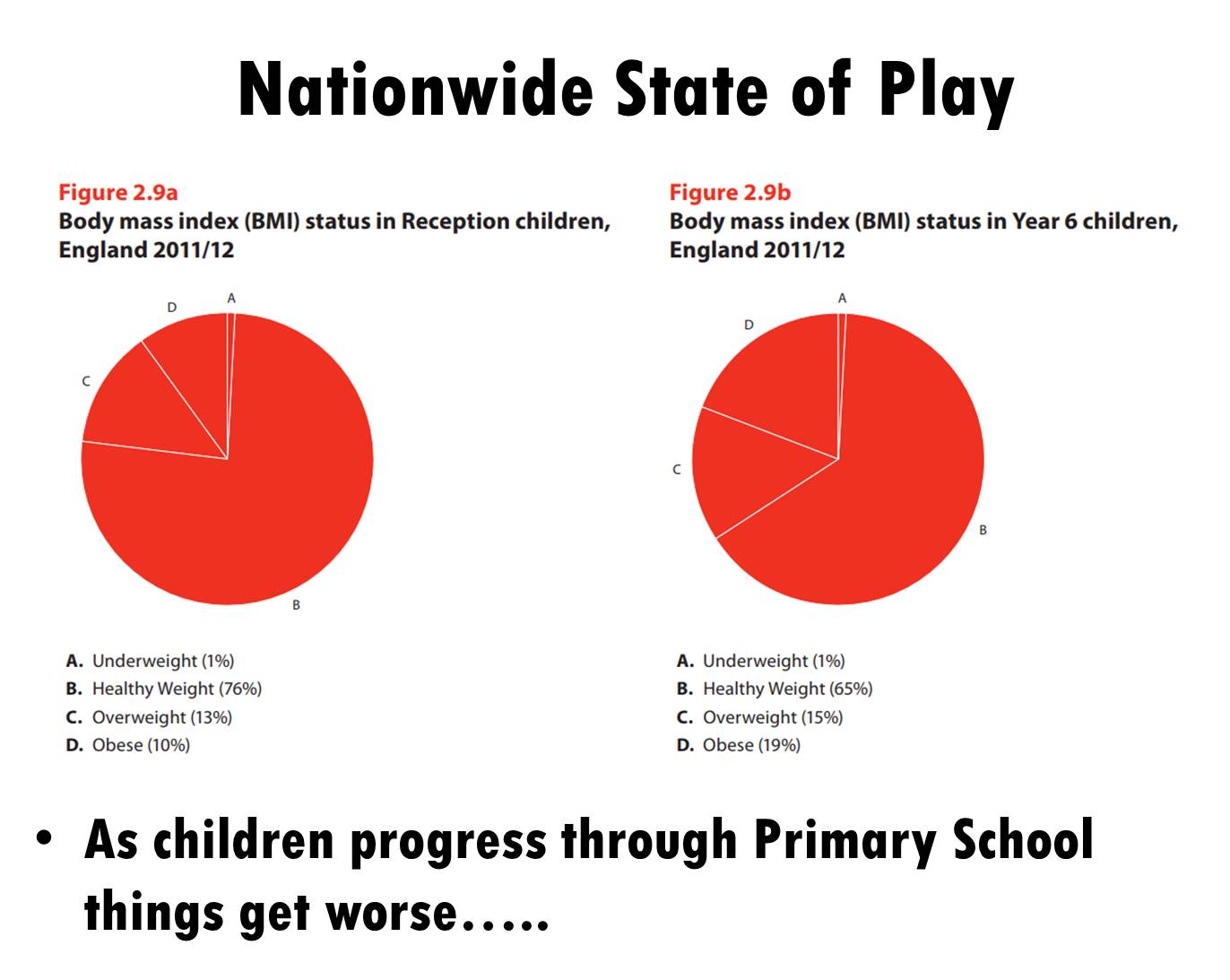 This statistic had us scratching our heads, it suggests that as children go through Primary School their health decreases. The above statistic refers to children Nationally, 9% of which have moved to the obese category in a space of 7 years! So who is responsible? As with most questions that lend themselves to debate, I believe it is impossible to point the finger at one party. It is a combination of factors, and I think it is fair to assume that the worst case scenario occurs when none of these are communicating with each other.

Unfortunately the situation is worst in my own city… 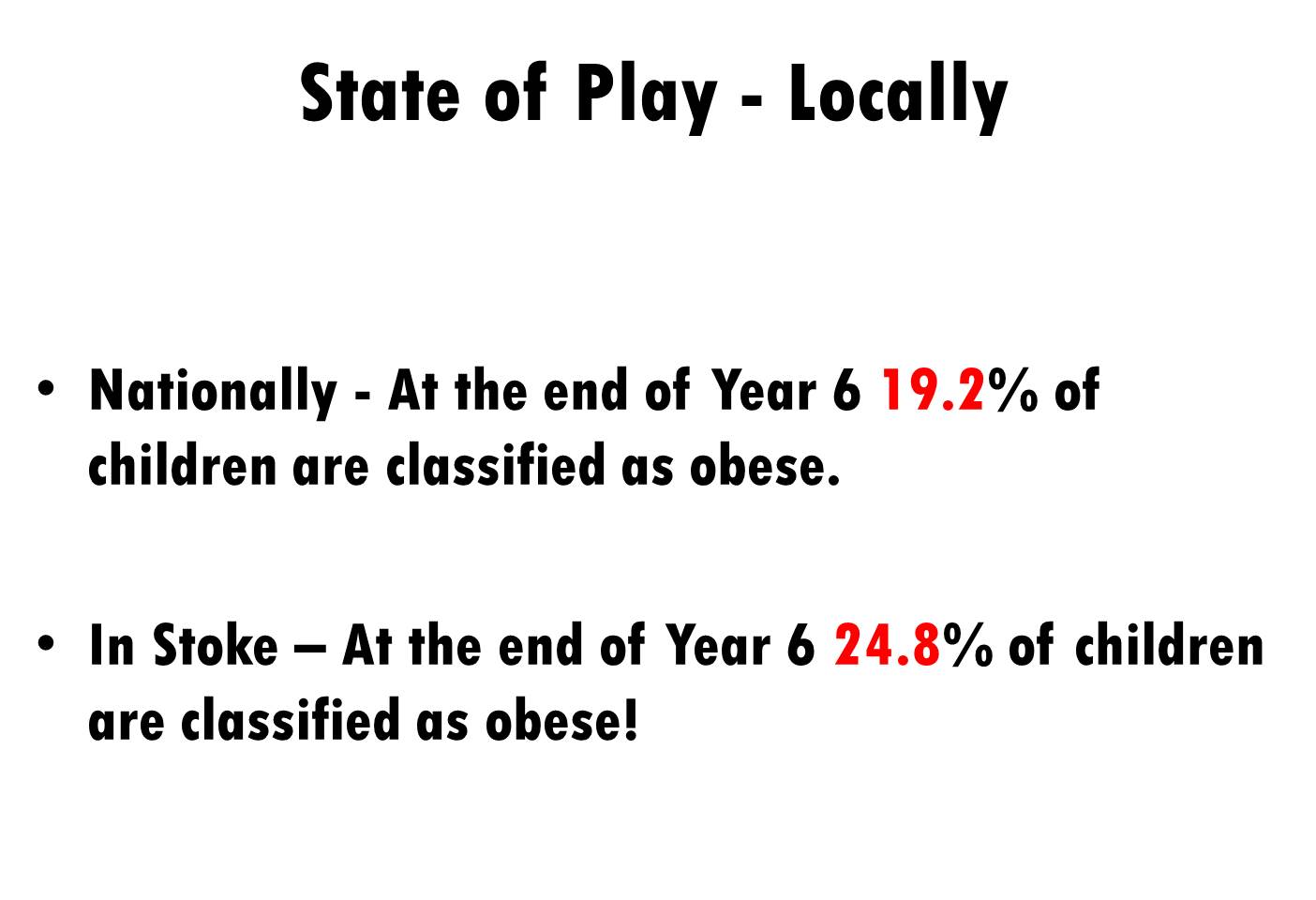 A quarter! The more I think about this the more I wonder…. Why is this not a HUGE conversation in the local press weekly!

Once I had established the ‘state of play’ we started to discuss why we think the situation is as poor as it is.

Education as a wider subject requires further development in Stoke (we have improved considerably in recent years), however as a City we still fall below several national averages and that could potentially/probably mean that families in Stoke are short on information/knowledge. Without question a large factor in the issue is financial – unfortunately a lot of healthy food is dear in comparison to other options AND a potential barrier to ex-curric exercise is the amount of money a session/class/club costs.

Another stumbling block is the dearth of Sporting organisations. If you wish to play Football, Cricket, Netball or Rugby in Stoke then you are very well catered for. But if you want to play more Basketball/Hockey/Handball/Parkour/Jiu Jitsu/Rounders etc etc etc then we really don’t have a lot of diversity. The council repeatedly attempts to shut our Gymnastics Centre, the very same Gymnastics centre has a 3 year waiting list to be allowed to train there due to its popularity!

We find that we often struggle to pass our children on to clubs/classes that exist outside of School. Partially through lack of opportunity but also through poor marketing/advertising from the Council itself. A while ago I suggested that part of the new funding should filter through to local clubs to allow them to flourish, this certainly seems appropriate in Stoke-on-Trent. (Read my thoughts on the Gov’s Childhood Obesity plan here)

In an attempt to learn a little more about the clubs going on around the City I asked the adults to fill out any ‘physically active’ clubs/classes there children have attended at any point. I started to notice a trend… “We used to take Billy to….. but it doesn’t run now” “Amelia LOVED going to….. but they moved to Stafford”. This exercise did prove fruitful though, I’m now aware of a few things going on that I wasn’t aware of before. My favourite being a family park run that is run as a non-profit in one of the central parks in the City. I’ve now managed to get my hands on a big box of flyers! 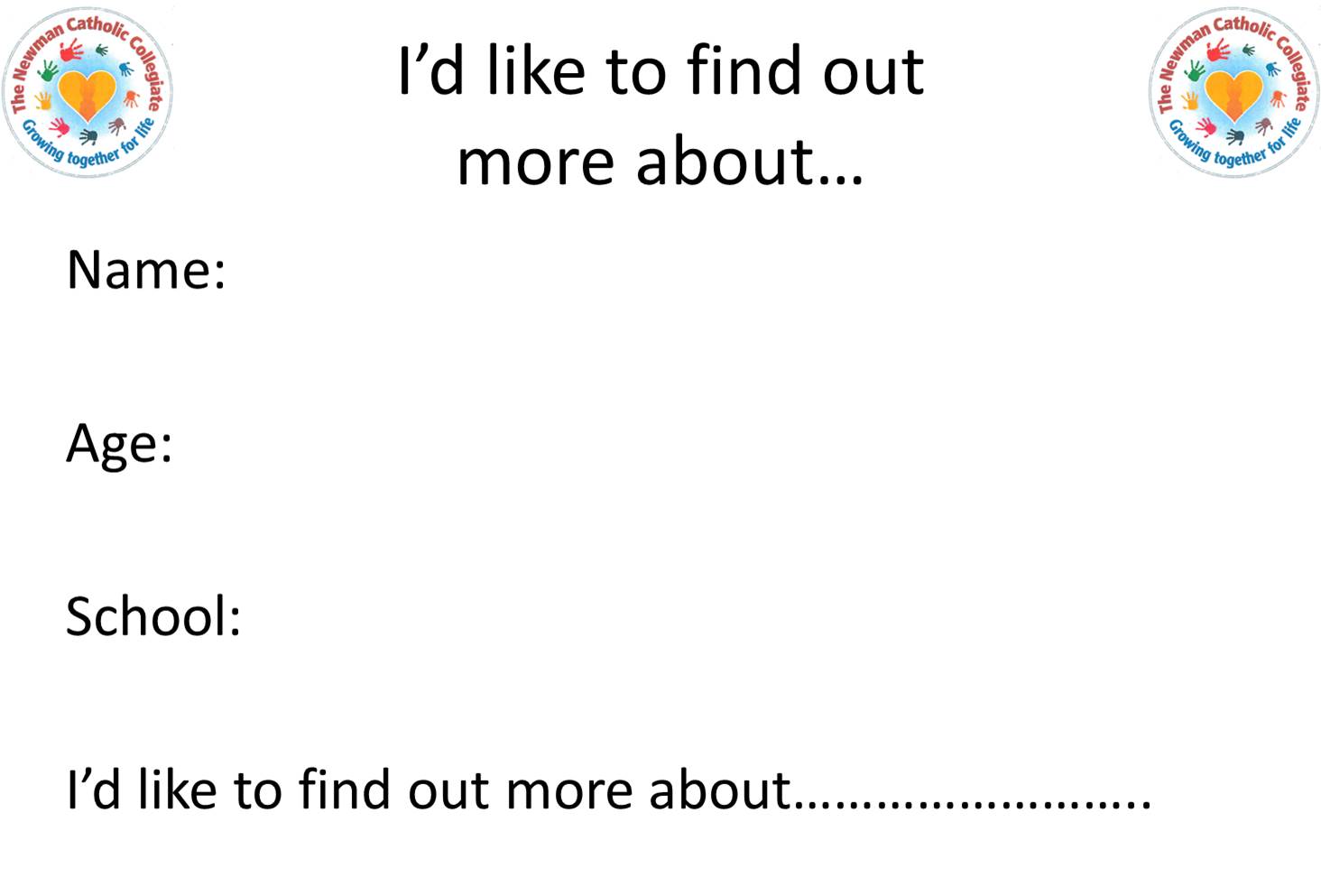 I also passed out these to the adults, it is basically a form for the kids to fill out to register their interest in an activity. I then will try my best to find them the nearest club that they could attend. We have a great website called ‘Sport Across Staffordshire’ which allows to pop in your postcode and find clubs near you. The only problem is when you try to ring or e-mail, response rate is depressingly low.

My intention is to create as many club links as I possibly can within the local area, to compile these and to create a ‘What’s going on!’ type brochure for my Schools. So they simply have to look at the brochure and see what tickles their fancy!

The second hour consisted of activity & fun! The idea was to show the families daft games they could play with minimal equipment/prior knowledge that gets everybody moving and hopefully laughing too! I’ve attempted to summarise a few here for you to pinch if you want to… 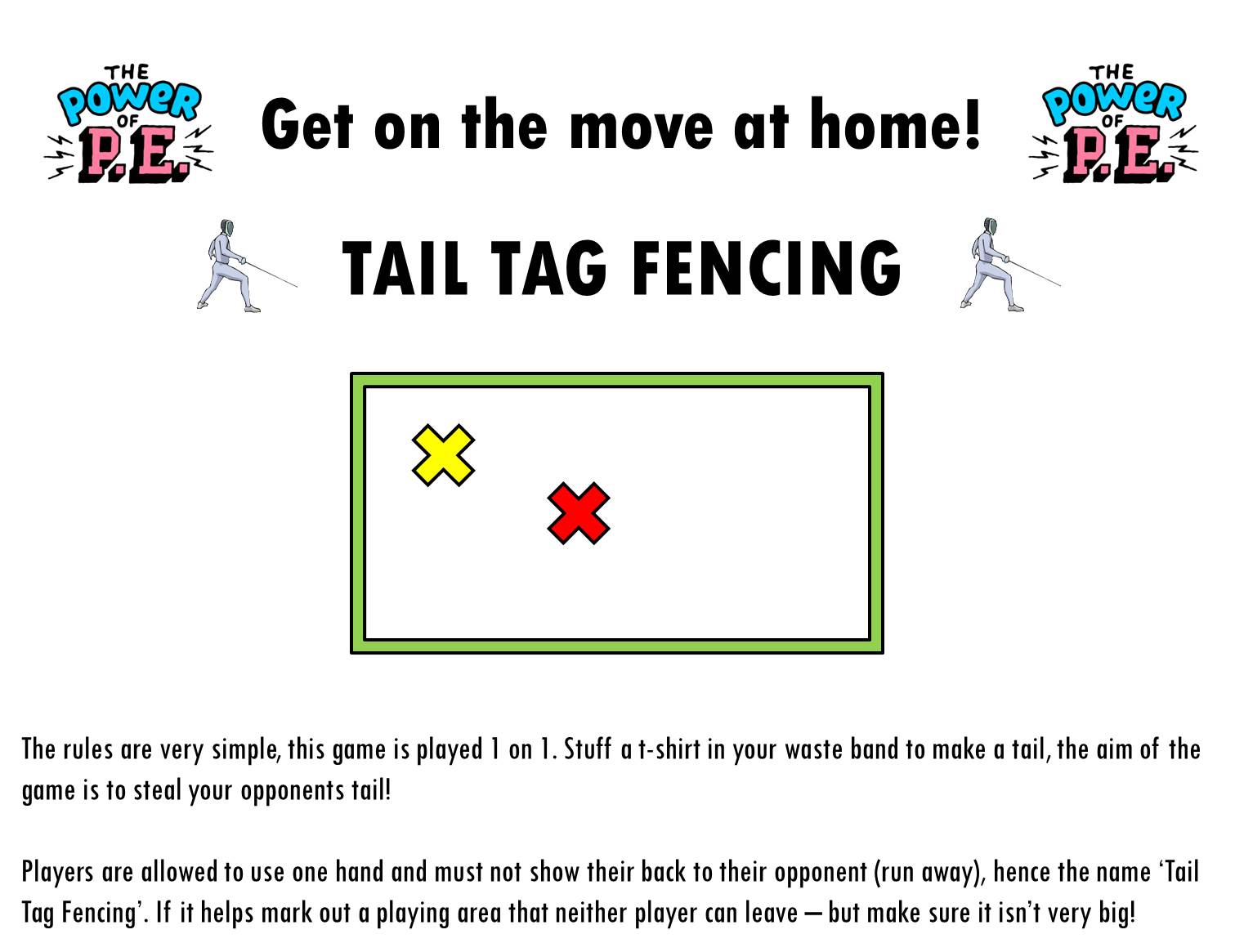 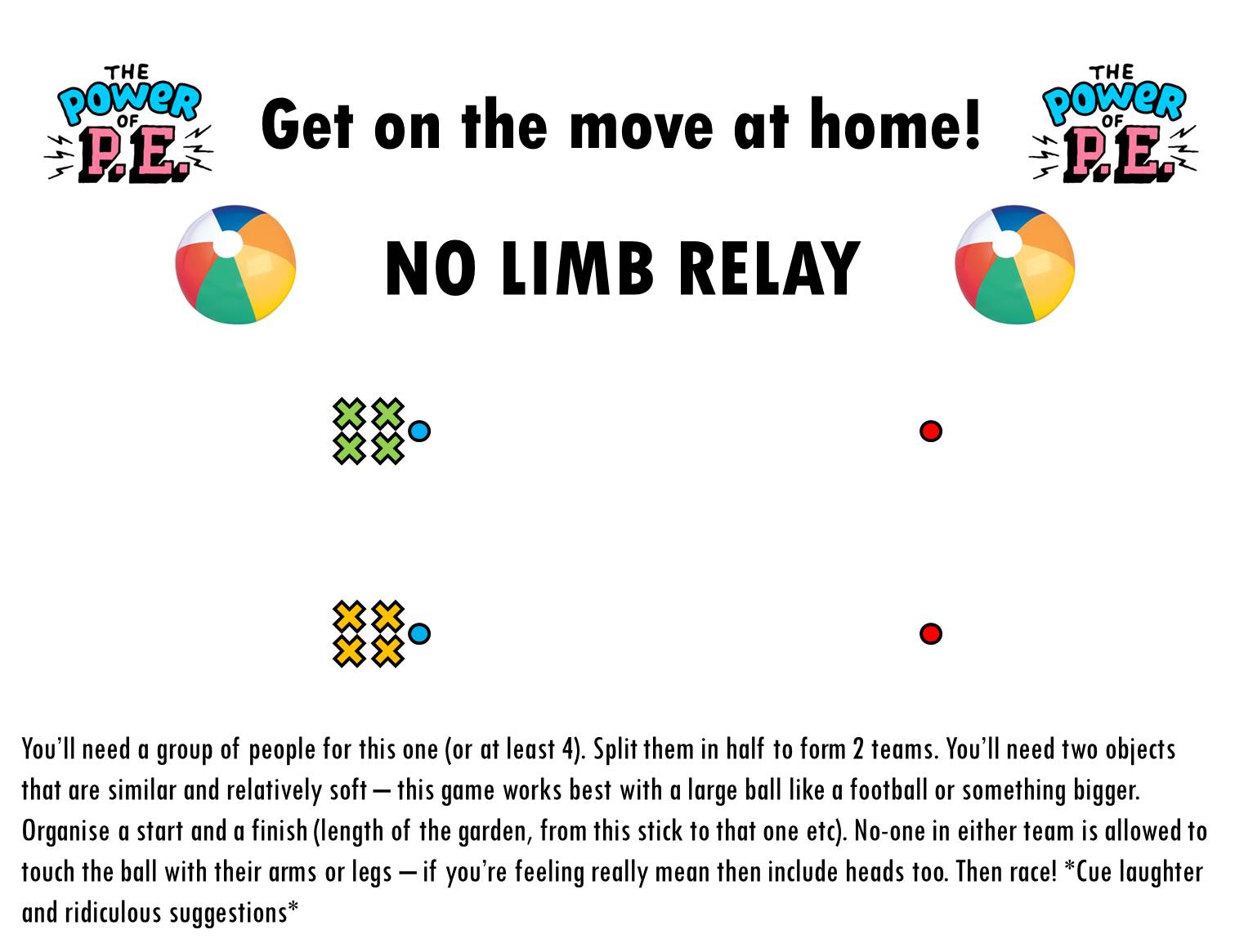 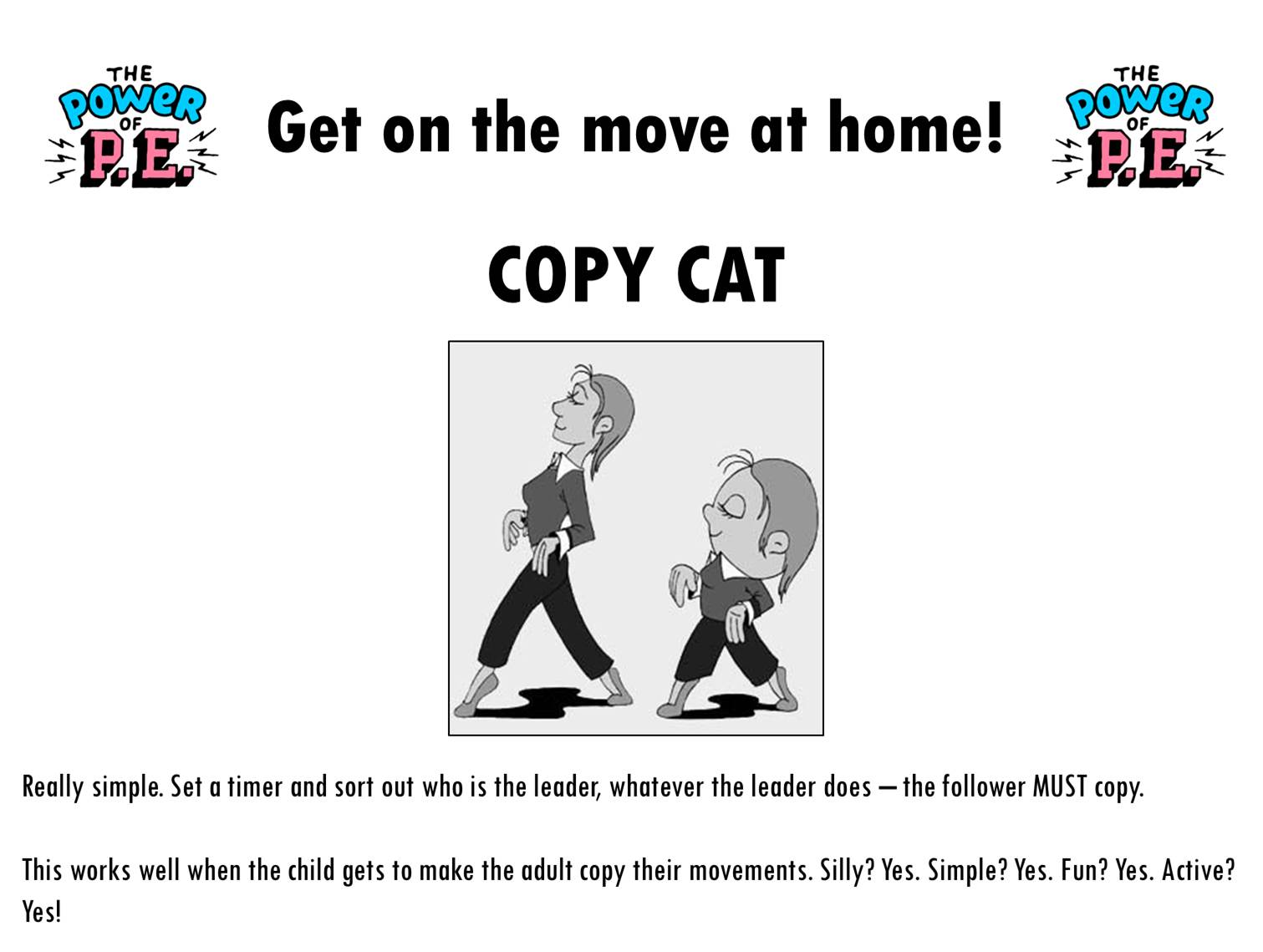 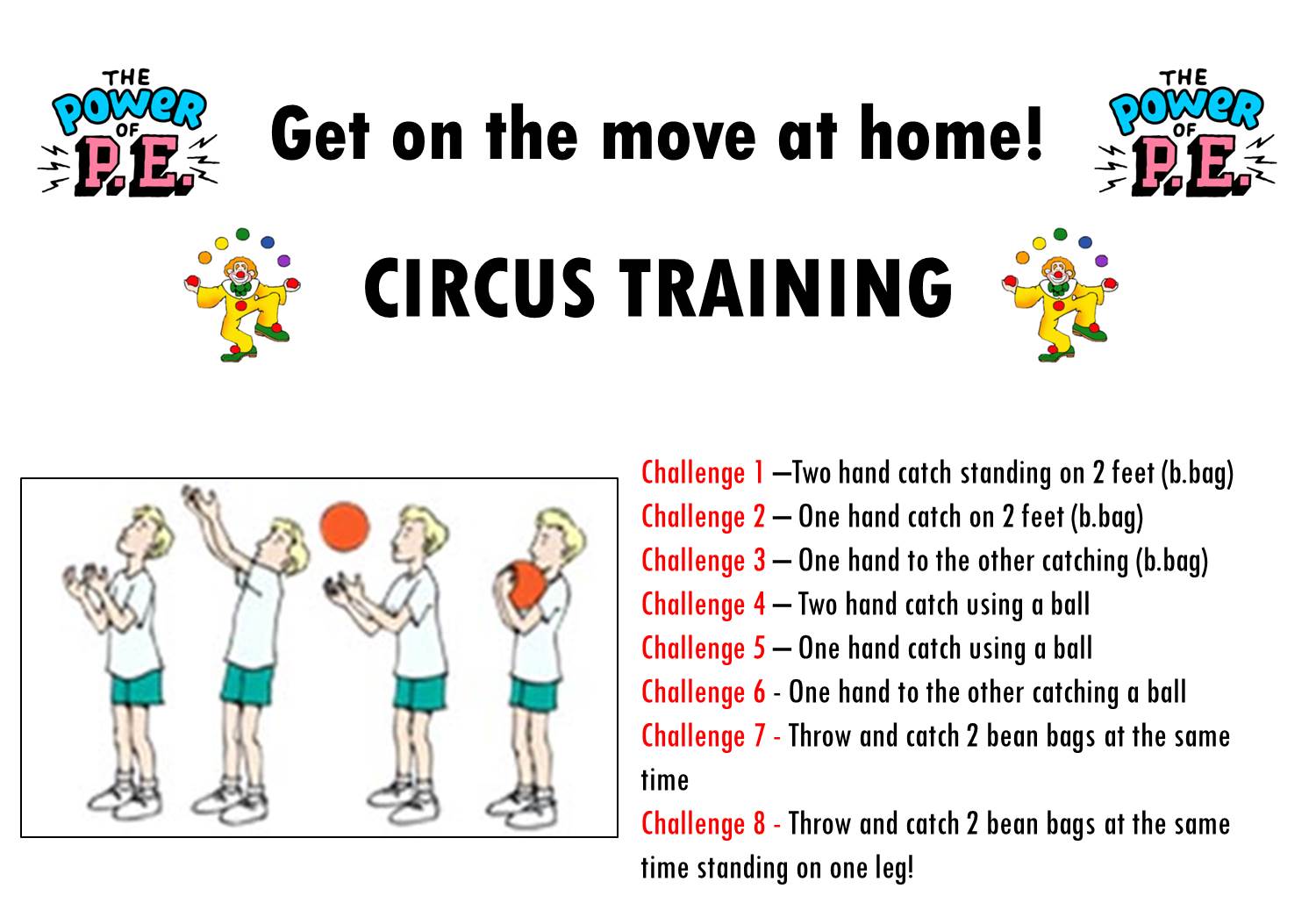 Once we had all messed around and got a little hot under the collar, I finished by showing them the Change 4 Life website. I’m sure most of you are familiar with the ten minute shake ups, but they are very good when you consider this particular task. Minimal equipment, no thought needed (it is all done for you), gets everybody moving and there are tenuous links to Disney characters. The page looks the screenshot below, you just have to clip on a character then the rest is done for you!

We did these with the families to help them to get it know it better (also if the kids see it, they’re more likely to pester to do it!). 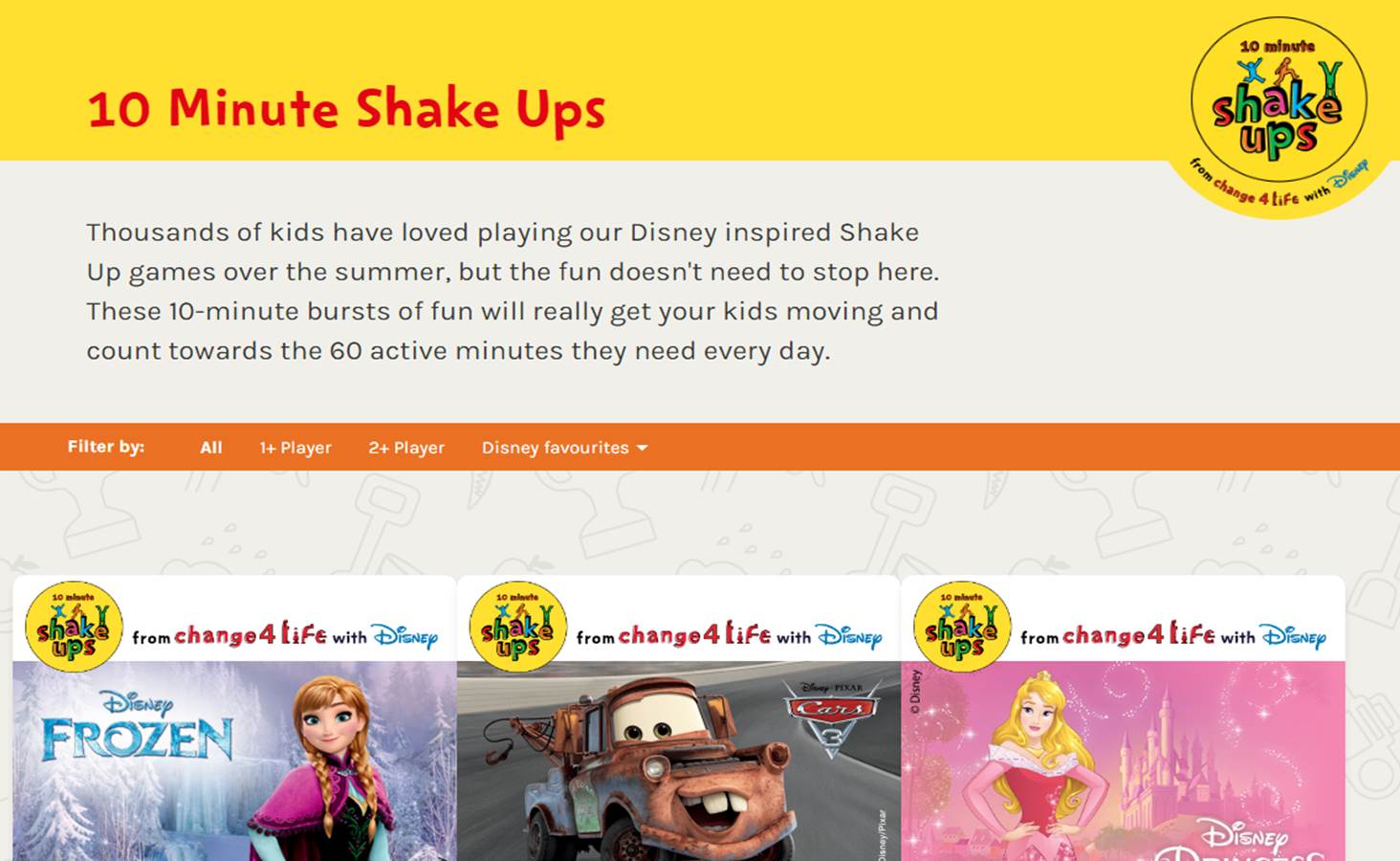 Since the workshops I have been handed four notes from parents with details of clubs, had 26 ‘I’d like to know more about…’ forms handed in & four of the children we targeted signed up for School ex-curric clubs the day after. But I think the biggest positive to come out of the event was the sense that all parties are now starting to work together as a team to improve the lives of our community. If we are going to reverse the behaviours our City seems to have adopted, teamwork will be integral.